Abstract: "Hofstadter has emphasized that Gödel, Escher, Bach is not about the relationships of mathematics, art, and music, but rather about how cognition emerges from hidden neurological mechanisms. At one point in the book, he presents an analogy about how the individual neurons of the brain coordinate to create a unified sense of a coherent mind by comparing it to the social organization displayed in a colony of ants." - Wikipedia 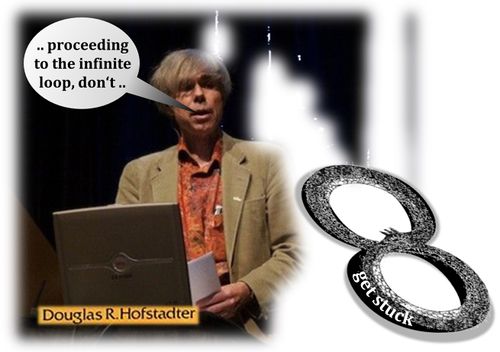 In the copy which Bach sent to King Frederick, on the page preceding the first sheet of music, was the following inscription:

("At the King's Command, the Song and the Remainder Resolved with Canonic Art.") Here Bach is punning on the word "canonic", since it means not only "with canons" but also "in the best possible way". The initials of this inscription are

Both of the fugues are inscribed "Ricercar", rather than "Fuga". This is another meaning of the word; "ricercar" was, in fact, the original name for the muscial form now known as "fugue".

The ten canons in the Muscial Offering are among the most sophisticated canons Bach ever wrote. However, curiously enough, Bach himself never wrote them out in full. This was deliberate. They were posed as puzzles to King Frederick. It was a familiar musical game of the day to give a single theme, together with some more or less tricky hints, and to let the canon based on that theme be "discovered" by someone else.

The idea of a canon is that one single theme is played against itself. This is done by having "copies" of the theme played by various participating voices. But there may be many ways to do this. .. In order to for a theme to work as a canon theme, each of its notes must be able to serve in a dual (or triple, or quadruple) role: it must firly be part of a melody, and secondly it must be part of a harmonization of the same melody. When there are three canonical voices, for instance, each note of the theme must act in two distinct harmonic ways, as well as melodically. Thus, each note in a canon has more than one musical meaning: the listener's ear and brain automatically figure out the appropriate meaning, by referring to context.

There are more complicated sorts of canons, of course. The first escalation in complexity comes when the "copies" of the theme are staggered not only in time, but also in pitch; thus, the first voice might sing the theme starting on C, and the second voice, overlapping with the first voice, might sing the identical theme starting five notes higher, on G. A third voice, starting on the D yet five notes higher, might overlap with the first two, and so on. The next escalation in complexity comes when the speeds of the different voices are not equal; thus, the second voice might sing twice as quickly, or twice as slowly, as the first voice. The former is called diminution, the latter augmentation (since the theme seems to shrink or to expand).

We are not yet done! The next stage of complexity in canon construction is to invert the theme, which means to make a melody which jumps down wherever the original theme jumps up, and by exactly the same number of semitones. .. Finally, the most esoteric of "copies" is the retrograde copy — where the theme is played backwards in time. .. Notice that every type of "copy" preserves all the information in the original theme, in the sense that the theme is fully recoverable from any of the copies. Such an information-preserving transformation is ofthen called an isomorphism, ..

Sometimes it is desirable to relax the tightness of the canon form. One way is to allow slight departures from perfect copying, for the sake of more fluid harmony. Also, some canons have "free" voices — voices which do not employ the canon's theme, but which simply harmonize agreeably with the voices that are in canon with each other.

An Endlessly Rising Canon - the Ouroboros and Strange Loops 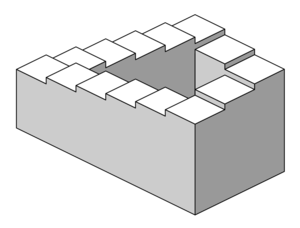 There is one canon in the Muscial Offering which is particularly unusual. Labeled simply "Canon per Tonos", it has three voices. The uppermost voice sings a variant of the Royal Theme, while underneath it, two voices provide a canonic harmonization based on a second theme. The lower of this pair sings the theme in C minor (which is the key of the canon as a whole), and the upper of the pair sings he same theme displaced upwards in pitch by an interval of a fifth. What makes this canon different from any other, however, is that when it concludes — or, rather, seems to conclude — it is no longer in the key of C minor, but now is in D minor. Somehow Bach has contrived to modulate (change keys) right under the listener's nose. And it is so constructed that this "ending" ties smoothly onto the beginning again; thus one can repeat the process and return in the key of E, only to join again to the beginning. These successive modulations lead the ear to increasingly remote provinces of tonality, so that after several of them, one would expect to be hopelessly far away from the starting key. And yet magically, after exactly six such modulations, the original key of C minor has been restored! All the voices are exactly one octave higher than they were at the beginning, and there the piece may be broken off in a muscially agreeable way. Such, one imagines, was Bach's intention: but Bach indubitably also relished the implication that this process could go on ad infinitum, which is perhaps why he wrote in the margin "As the modulation rises, so may the King's Glory." ..

In this canon, Bach has given us our first example of the notion of Strange Loops. The "Strange Loop" phenomenon occurs whenever, by moving upwards (or downwards) through the levels of some hierarchical system, we unexpectedly find ourselves right back where we started.

Eating its own tail

'Lady Lovelace, no less than Babbage, was profoundly aware that with the invention of the Analytical Engine, mankind was flirting with mechanized intelligence - particularly if the Engine were capable of "eating its own tail" (the way Babbage described the Strange Loop created when a machine reaches in and alters its own stored program). In an 1842 memoir, she wrote that the A.E. "might act upon other things besides number". While Babbage dreamt of creating a chess or tic-tac-toe automaton, she suggested that his Engine, with pitches and harmonies coded into its spinning cylinders, "might compose elaborate and scientific pieces of music of any degree of complexity or extent."'

.. the word "isomorphism" was defined as an information-preserving transformation. .. The word "isomorphism" applies when two complex structures can be mapped onto each other, in such a way that to each part of one structure there is a corresponding part in the other structure, where "corresponding" means that the two parts play similar roles in their respective structures. .. The perception of an isomorphism between two known structures is a significant advance in knowledge — and I claim that it is such perceptions of isomorphism which create meanings in the minds of people.

‘When a code is familiar enough, it ceases appearing like a code; one forgets that there is a decoding mechanism. The message is identical with its meaning’. (Quoted in BEC 2020.1)