From Bioblast
Jump to: navigation, search

Abstract: BACKGROUND: Body mass index (BMI) represents a normalization of weight to height and is used to classify adiposity. While the capacity of BMI as an adiposity index has been experimentally validated in Caucasians, but there has been little testing Asian populations.

METHODS: To determine whether weight scales to height squared in Asian Indians across the general population and in Asian Indian tribes an allometric analysis on the power law model, W =αHβ, where W is weight (kg) and H is height (m) was performed on cross-sectional weight and height data from India (N = 43,880) collected through the Anthropological Survey of India. The database contained males 18-84 years of age spanning 161 districts of 14 states and including 33 different tribes (N = 5,549). Models were developed that were unadjusted and adjusted for tribe membership. The Korean National Health and Nutrition Examination Survey (KNHANES) was used to compare to height-weight data from the Anthropological Survey of India and to calculate BMI thresholds for obesity status using a receiver operating characteristic.

CONCLUSIONS: Our study confirms that weight scales to height squared in Asian Indian males even after adjusting for tribe membership. We also demonstrate that optimal BMI thresholds are lower in a Korean population in comparison to currently used BMI thresholds. These results support the application of BMI in Asian populations with potentially lower thresholds.

From BMI to BME 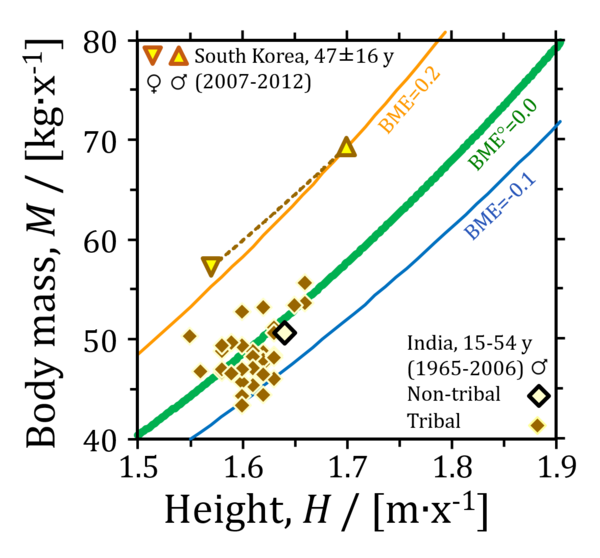 Hood et al (2019) suggest that their study 'confirms that weight scales to height squared'. Do their and many similar studies qualify for more than the trivial statement: 'Without reference to a rational (mechanistic, physiolgocial, evolutionary, ..) hypothesis, the relationship observed between body mass and height in this particular database does not provide evidence for or against a specific exponent in the allometric body mass/height power function'. The assumption that body mass scales to height squared in various present-day populations has no rational foundation (this challenges the corresponding working hypotesis). It is important, therefore, to define the fundamental hypothesis, upon which a judgment of the power function with an exponent of two carries heuristic relevance. A 'fundamental' hypothesis cannot be gauged on mere convention and historical track record (think of the religious and scientific believes in the heliocentric world-view). An allometric power function can be calculated from any data collected recently on any population of the world. So what? There is a solidly documented global trend towards increased overweight and obesity (##). Importantly, however, there is strong evidence that different socio-economic subgroups of a population (women versus men, children versus adults, large versus small, affluent versus poor) are affected differently by the general trend towards obesity. Consequently, the allometric height exponent A (A=2 in the BMI paradigm) observed in any current study reveals interesting information on the differential trends towards obesity, without any relevance on the general anthropomorphic concept of the BMI.

Figure 2: Body mass (a), and body mass index, BMI (b) as a function of height. Data from the Indian Academy of Pediatrics Growth Charts Committee 2015 Indian Pediatr, Hood et al (2019), and Bosy-Westphal et al (2009). South Korean women have a lower BMI than men, but are more displaced from the BME=0.2 cutoff line. (c) BMI as a function of body mass excess, BME. At any constant height, the BMI increases linearly with BME (grey lines), but at constant BME the BMI increases as a function of height, from 15 kg·m-2 at 1.2 m/x to 20 kg·m-2 at 1.7 m/x.

The relevant questions and directions of research are: (1) Define the allometric healthy reference population (HRP). WHO standars provide an invaluable resource. (2) Forge WHO standards and additional historical resources into basline parameters. These need to be validated across: