The terms hydrogen ion H+ and proton, p or p+, are used synonymously in chemistry. A hydrogen ion is a positively charged molecule. In particle physics, however, a proton is a submolecular and subatomic particle with a positive electric charge. The H+ ion has no electrons and is a bare charge with only about 1/64 000 of the radius of a hydrogen atom. Free H+ is extremely reactive, with an extremely short lifetime in aqueous solutions. There H+ forms the hydronium ion H3O+, which in turn is further solvated by water molecules in clusters such as H5O2+ and H9O4+. The transfer of H+ in an acid–base reaction is referred to as proton transfer. The acid is the H+ donor and the base is the H+ acceptor.

Isotopes of the hydrogen ion

The most common isotope of hydrogen in nature contains a proton without any neutrons in the nucleus: 1H is called protium, distinguished from the second stable isotope deuterium 2H, and the third naturally occuring isotope is tritium 3H with a half-life of 12.32 years. The dissociation constant of heavy water (deuterium oxide) differs from normal water (Robinson et al 1969). 1H+ and 2H+ are hydrogen ions H+, but 2H+ is more than a proton. Respiratory complex IV and the other pumps in the electron transfer system pump not only protons, but pump 2H+ ()

Perspectives and questions for bioenergetic adventurers 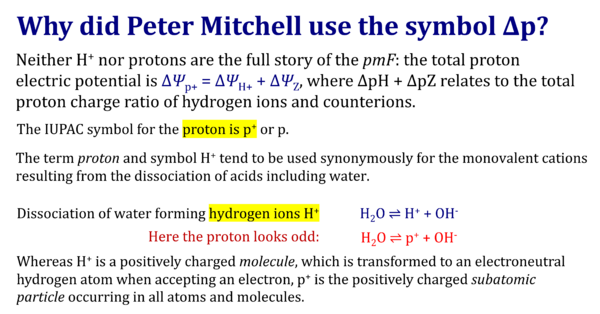 The following perspectives are considered in the 2020 edition of MitoPathways (Gnaiger 2020). There may be more to it:

Retrieved from "https://wiki.oroboros.at/index.php?title=Hydrogen_ion&oldid=233909"
Categories:
This page was last edited on 10 November 2022, at 08:53.
This page has been accessed 8,118 times.
Privacy policy
About Bioblast
Disclaimers